We got our Oculus Rift dev-kit last week. DHL delivered it some time this summer. We were all over europe at the time, but PK was able to take the delivery. It appears he spent a good chunk of his vacation inside Half Life 2. “Didn’t we get the Oculus this summer?” He gave it up reluctantly. We had to let him keep it over the weekend before bringing it in. Then we all had a go. 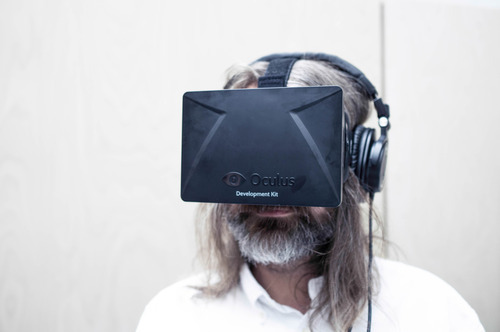 I never got to try any of the high end VR-gear in the early 90s. The closest I ever got to first-wave VR was about fifteen years ago in a CAVE automatic virtual environment at Telenor Expo here in Oslo. CAVEs put you in a physical room surrounded on all sides by projection surfaces. Using active shutter glasses and head tracking it virtually blows out all four walls and potentially even the floor and ceiling. I held a manipulation pen that shot bright green vector pixels precisely from its tip. It took me on a virtual tour in a south african mine. It let me play with an interactive aerodynamics simulation letting me move around like a ghost through the car body. The illusion so vivid it got kind of unclear whether it was my body or the simulation that was immaterial.

Like after a day on a rolling boat, or a newbie afternoon on a snowboard, I stumbled onto the sidewalk with an unsure gait. I don’t generally recall any specifics from the late 90s. But the CAVE is still vibrant. 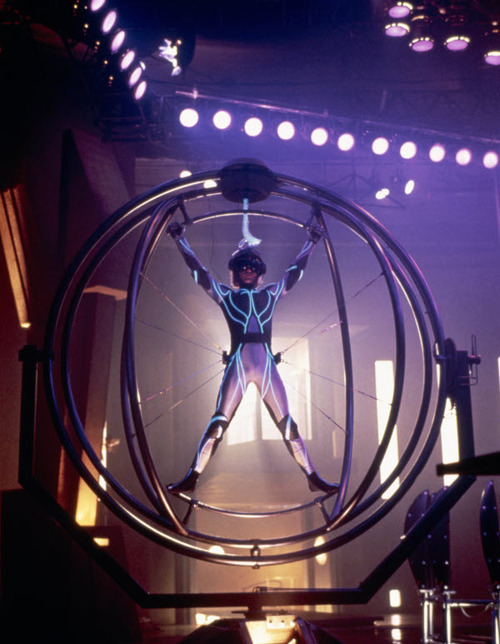 Musing enthusiastically on the technological premise in the Lawnmower Man is hard. It is difficult being elated by stuff submerged at the bottom of the trough of disillusionment. So I took to the webs and revisited that time when VR crested the hype cycle. Here: John Perry Barlow writing in Mondo 2k in 1990 – Being in nothingness:

And I don’t seem to have a location exactly. In this pulsating new landscape, I’ve been reduced to a point of view. The whole subject of “me” yawns into a chasm of interesting questions. It’s like Disneyland for epistomologists. “If a virtual tree falls in the computer-generated forest..?” Or “How many cybernauts can dance on the head of a shaded solid?” Gregory Bateson would have loved this. Wittgenstein, phone home.

Despite the current confines of my little office-island, I know that I have become a traveller in a realm which will be ultimately bounded only by human imagination, a world without any of the usual limits of geography, growth, carrying capacity, density or ownership. In this magic theater, there’s no gravity, no Second Law of Thermodynamics, indeed, no laws at all beyond those imposed by computer processing speed…and given the accelerating capacity of that constraint, this universe will probably expand faster than the one I’m used to.

Which brings me to a point which makes Jaron Lanier very uncomfortable. The closest analog to Virtual Reality in my experience is psychedelic, and, in fact, cyberspace is already crawling with delighted acid heads.

The reason Jaron resents the comparison is that it is both inflammatory (now that all drugs are evil) and misleading. The Cyberdelic Experience isn’t like tripping, but it is as challenging to describe to the uninitiated and it does force some of the same questions, most of them having to do with the fixity of reality itself.

This last part is what unsettles me about the Oculus Rift. Once you strap into it and start walking about in one of the tech demos, reality instantly recedes. The vertiginous effect of leaning back, looking down past the awning of a balcony doorway onto the room below.

As an aside, these stories afford a picture of a younger Jaron Lanier, in his 20s. Before he decided the stuff his friends came up with would lead to erm, “Digital Maoism.” – I like the unalloyed positive technological determinism – the promise of a shinier technological epistemology from this article from the NYTimes:

«It’s a new level of reality,» said Mr. Lanier, a 28-year-old programmer who has become a guru of the artificial reality movement. «There’s never been another one except for the physical world, unless you believe in psychic phenomena.»

I like that, the NYTimes writing about an “artifical reality movement” in 1989 – very 90s, like a movement for ahistorical immaterialism – remniscent of the neocons under Bush Jr.:

The aide said that guys like me were “in what we call the reality-based community,” which he defined as people who “believe that solutions emerge from your judicious study of discernible reality.” … “That’s not the way the world really works anymore,” he continued. “We’re an empire now, and when we act, we create our own reality. And while you’re studying that reality—judiciously, as you will—we’ll act again, creating other new realities, which you can study too, and that’s how things will sort out. We’re history’s actors…and you, all of you, will be left to just study what we do.”

But I’m straying from the topic at hand.

What I really wanted to say was that John Perry Barlow is spot on. When you strap into the Rift to your head, reality does recede. The voices of the people in the room come from far away. They seem bothersome, demonic, at odds with where you actually are. This sense of being dislocated into new spaces holds great promise. It promises great utility, fantastic entertainment, and incredible social ills.